Carola Conces Binder, Ph.D. candidate, economics | March 24, 2013
In a recent column in the Atlantic called “Building the Wealth of the Poor and Middle Class,” Noah Smith suggests a few ways to improve the unequal distribution of wealth in America. He notes that “one obvious thing we could do to make wealth more equal is – surprise! -redistribution…Giving the poor and middle-class more income will boost the amount they are able to save, the percentage they are willing to save, and the return they get on those savings. Part of the reason America’s wealth distribution is so unequal in the first place is that our income distribution is very unequal.” But he adds (emphasis added):

There are reasons to believe that redistribution can’t fix all of the problem, or even most of it. If you do the math, you discover that in the long run, income levels and initial wealth…are not the main determinants of wealth. They are dwarfed by…savings rates and rates of return. The most potent way to get more wealth to the poor and middle-class is to get these people to save more of their income, and to invest in assets with higher average rates of return…In addition to “nudging” middle-class and poor Americans to save more, we can help them get a better return on their assets — the second thing that has a huge effect on wealth in the long run.

I think there is good reason to believe that a lot of people don’t understand the importance of getting a good return on their assets. I am working with the Dutch National Bank Household Survey data in my research, and some of the survey questions have to do with motivations for saving. About 2000 households take the survey. In one question they are asked  to rate how important it is “To save so that I generate income from interests or dividends” on a scale from 1 to 7, with 1 being “very unimportant” and 7 being “very important.” They can also choose “not applicable.”

In 2012, the most common response to this question was 1, that is, that generating return is a very unimportant consideration in household’s saving behavior. Two other questions ask how important it is to save “so that I have some extra money to spend when I’m retired” and “to cover unforeseen expenses.” The most common answer to both of these questions was 6, with most respondents choosing 5, 6, or 7. In short, even though most respondents understand some reasons for saving, they do not see much importance of saving to earn interests or dividends. This data is from Dutch households, but American households are probably similar: many people likely do not realize the power of compound interest or understand how getting a good return on assets has a huge impact on wealth in the long run.

In the chart below, I plot responses to the question about the importance of saving to generate income from interests or dividends in 2012, grouped by people without and with a university education. The university-educated group rates this as somewhat more important. Respondents are also asked to self-report their level of financial knowledge. In the second graph I plot the fraction of people who respond 5, 6, or 7 by self-reported financial knowledge. Only 16% of people who say they are “not knowledgeable” think that saving to generate income from interests or dividends is important or very important, compared to 39% of “very knowledgeable” people. 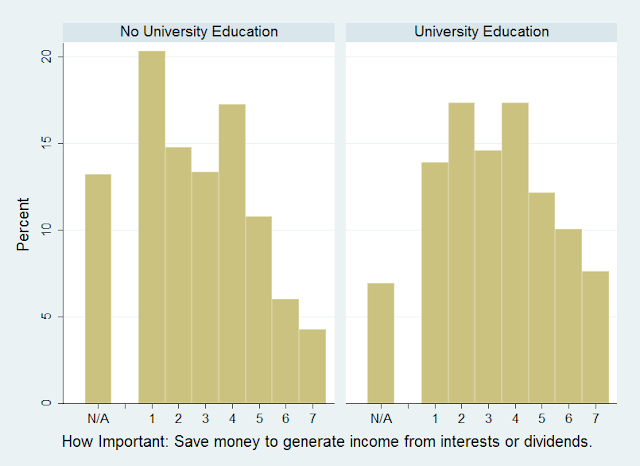 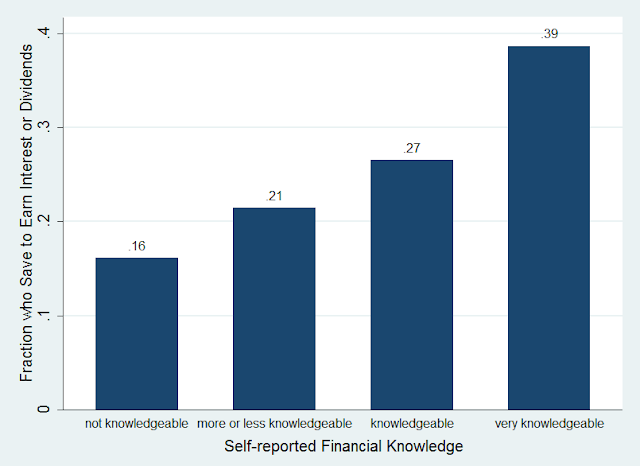 I think this lends some support, however tentative, to Noah Smith’s proposal to teach the public more about how wealth builds over time and why it is important to get a good rate of return. If people don’t really grasp the importance of earning interest, then they are not very likely to make an effort to get a good return, which doesn’t bode well for their future wealth. And knowledge does seem to help.

(This is cross-posted from my blog.)