Alice Weidel and Alexander Gauland, co-leaders of Alternative for Germany, celebrate their victory

The surprise showing of the far-right nationalist party, Alternativ fuer Deutschland (AfD) in Sunday’s German election has struck fear in the hearts of many analysts. Is Germany’s liberal democracy and society simply a thin veneer covering the monster of virulent nationalism that has long been crouching in the dark, waiting for its chance to attack? Are AfD voters really Nazis in disguise who have finally found a way to gain respectability by riding the wave of far right, populist, nationalist and Trumpian alt-right sentiment which has flooded the Western world? Are Germany’s liberal norms, which long suppressed these sentiments, beginning to crumble?

With 13 percent of the vote, the AfD gained 94 seats in a now-bloated German parliament. The CDU/CSU, which emerged dominant with 246 seats, will try to build a coalition with the Liberals and the Greens, and the AfD voice is likely to be weak, not least because of internal conflict and the decision of its most “moderate” MP, Frauke Petry, to leave the party altogether. Nonetheless, it is the first rightwing nationalist party since the Nazis to enter the German law-making body, and its MPs have stoked the fears expressed above. Jens Maier stated that Germany must stop the “creation of mixed races.” Others have called the Holocaust a myth and argued that Germany should be proud of its soldiers’ successes in World Wars I and II. Officially the party calls for the immediate deportation of all initially rejected asylum seekers without appeal and wants to seal Germany’s borders to achieve what leader Alice Weidel calls “negative immigration” to Germany. The AfD has resurrected deeply buried Nazi tropes that recall the German fear of Jews that rose to its peak under Hitler. Indeed, the rise of the AfD — now stoking fear of Muslims — has lowered the bar for anti-Semitism in Germany, where the word “Jew” is now shouted as a schoolyard taunt. 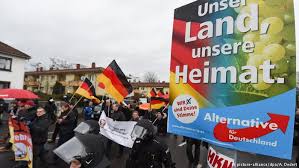 The electoral showing of the AfD is indeed a cause for concern. Why has it emerged as the third largest political party in Germany? Collectively, the media has found an easy scapegoat: Angela Merkel’s policy of accepting a million refugees into Germany in 2015 and insisting that Germany will impose no upper limit on the number of refugees it will accept in the future. The AfD is commonly called the “anti-immigrant party.” Merkel herself admitted that her refugee policy was responsible for Germany’s deep political polarization.

But Merkel’s asylum policy is not the reason for the rise of the AfD. The AfD is strongest in the East, where the resettlement of immigrants has been the lowest, that is, where population growth due to immigration has been a mere 0.5 per cent. AfD strength has been the weakest where population growth due to refugee resettlement has been the greatest. Why does the East resettle fewer asylum seekers? Because those asylum seekers are distributed according to population size and the individual state’s tax base. Richer, more populous states receive more asylum seekers, and those states have the fewest AfD supporters. The four poorest German states are in the East where most AfD supporters reside. Aside from the city-states, such as Hamburg and Bremen, the Eastern states are the least densely populated.

Therefore, most AfD voters have never met a refugee, and many have rarely seen one. So why do they buy the far-right’s anti-immigrant rhetoric?  A large trove of social science research shows that white fear of demographic change is a more powerful predictor of conservative political attitudes in the West than demographic change itself. Native populations worry that whatever privileges and status they enjoy will be stripped away by foreigners flooding their countries. They are highly susceptible to nativist propaganda and xenophobic, ethnic nationalism.

In fact, AfD rhetoric targeted and stoked the fear of immigrants and fear of immigrant terrorism. A highly respected German political polling agency, Infratest dimap, found that almost half of all German voters believed that of all the German political parties, the AfD best understood why people did not feel “safe.” One poll found that 95% of AfD voters themselves felt that they voted for the AfD because they feared that their own “German language and culture” were threatened. Fear drives those whose economic status is precarious to feel threatened by the potential integration and rise of those whose status–as refugees and asylum seekers–is even lower. AfD rhetoric precisely targeted the cultural fears of those who see few economic prospects for themselves.

Opposition to Merkel’s asylum policies is simply a convenient scapegoat and a smokescreen masking the deeper problems that have brought the far right into the political system. In fact, it is Germany’s rising inequality combined with a stagnating and conservative aging population in former East Germany that has driven the rise of the AfD.  But wait: Germany is a rich country — the richest in Europe! It enjoys strong economic growth, record low unemployment and a massive trade surplus. Angela Merkel’s campaign slogan was “Prosperity for All!” Her time in office, however, has meant prosperity for the few. Admittedly, Germany has a large middle class. But under her reign — and admittedly due to the policies of her Social Democratic predecessor — it is fraying at the edges.

The number of Germans slipping into poverty is the highest since unification. And while the incomes of the richest 10 percent grew by 27 percent between 1991 and 2014, households at the bottom of the scale saw their incomes drop by 8 percent during the same period. Weakened trade unions made concession after concession to business. Wages increased by only 5 percent between 2000 and 2016 but investment income jumped by 30 percent. In 2000 Germany had the lowest income inequality in the world; it has now fallen behind the Czech Republic, Sweden, and Denmark. Now, the richest 10 percent of Germans own 60 percent of the wealth and manage to save almost half of what they earn, while the share of the bottom 40 percent is negligible. Low unemployment masks the fact that almost 7 million Germans are working part time, precarious jobs that pay as little as $540 per month. Those workers rely on state subsidies and accumulating debt to make ends meet. The lowest earners have less money in their pockets than they had 15 years ago, while Germany prosperity grows.

In the borderlands, East Germans watched while their Polish neighbors prospered, often crossing over to Germany to buy country homes, while their own prospects dimmed—Marianne Philippek

Those inching toward the bottom have turned in droves to the AfD. The German Institute for Economic Research (DIW) found that, although the AfD attracted voters from all income and educational levels, the median net household income of AfD voters is the lowest of all voters, including The Left. While AfD rhetoric appeals to all Germans with a pessimistic economic outlook, regardless of their income, the largest segment of AfD voters are aging blue collar men with low levels of education in East Germany — where wages were always lower than in the West but where now, growth has stagnated and investment has slowed to a trickle. A large percentage of AfD voters are unskilled and work part-time and temporary jobs, often cobbling together “mini-jobs” in order to get by. They are trapped in a low income cycle where chances for advancement are non-existent. A large-scale survey conducted by the Hans Boeckler Foundation revealed that voter dissatisfaction with their economic circumstances is the biggest driver of AfD support. Perhaps most importantly, a majority of far-right voters, regardless of their income, age, or education, describe their economic situation as unfair. While AfD voters blame immigrants for their “unfair” economic situation, they also strongly perceive a lack of respect and a lack of attention to their problems. http://www.sueddeutsche.de/politik/bundestagswahl-eine-ursache-fuer-den-erfolg-der-afd-mangel-an-respekt-1.3687269-2

AfD voters in East Germany have deep resentment. . .because unification left them behind economically and socially and…obliterated their individual biographies, especially their lives before the wall fell. –Christine Schoefer

These folks (who the AfD calls the Volk, evoking nativist Nazi slogans) are convinced that their unfair treatment is caused by immigration. After all, Germany spent €16 billion providing social protection, housing, and education to asylum seekers and refugees in 2015, at a cost of €10,000 per person. Expenditure to date has reached €93 billion. AfD voters ask why foreigners receive government aid while they struggle. They adhere to the myth–underlined in AfD rhetoric–that the labor market as a zero-sum game, where everyone is competing for a finite number of jobs, and they fear that it is immigration that will further diminish their odds of upward mobility.

Ironically, Merkel, the media, the large political parties — including the SPD (whose many years in government made it the “poodle” of the CDU/CSU)– and the talking heads blame Germany’s immigration policy for the rise of the extreme right AfD. In doing so, they play into the fear of foreigners that swayed AfD voters themselves. And they provide a convenient cover for the real explanation. Germany is rich enough to integrate its immigrants and rectify economic inequality. Merkel bucked her own political interests to welcome to Germany 1.5 million people fleeing war, persecution, and torture when other Europeans shamefully refused to give them shelter. Now she needs to attend to inequality and rising poverty and unless she attempts to fulfill her promise of “prosperity for all,” it is Germany’s far-right party that will prosper.